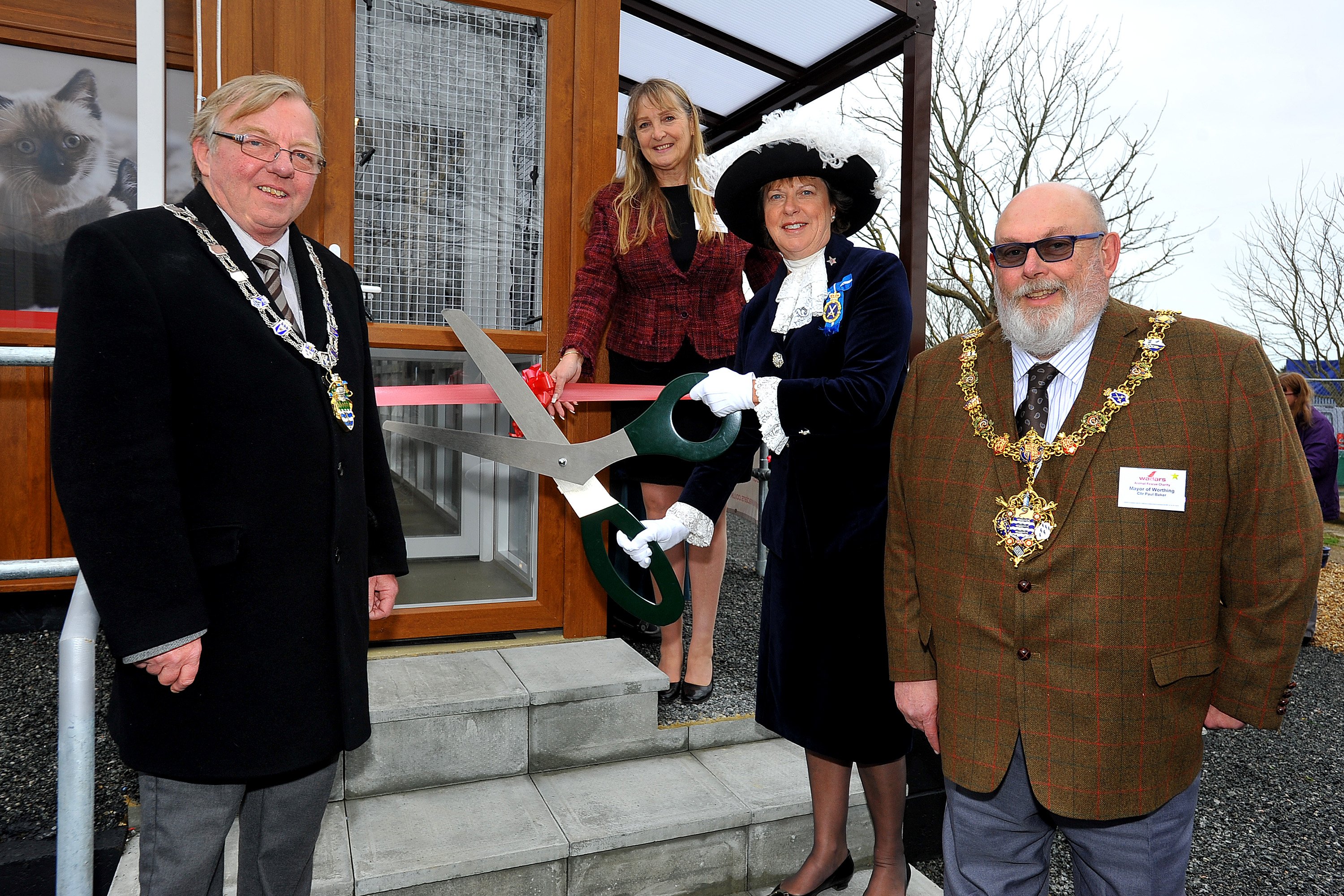 The High Sheriff of West Sussex, Mrs Caroline Nicholls DL officially opened the brand-new Wadars rehoming cattery at a ceremony which was held last week. Other VIPs at the event include the Chair of Arun District Council Cllr Alan Gammon and The Mayor & Mayoress of Worthing.

The cattery is part of the first phase of development at the charity’s site in Hangleton Lane, Ferring, which has also included creation of a small wildlife unit in which to house wild birds, hedgehogs and other small mammals until they can be released back into the wild.

The new purpose-built rehoming cattery can hold up to 34 cats and each pen consists of a large bedroom area leading to an enclosed run. With each pen individually heated, the bedroom can be closed off from the run during periods of cold weather. Several pens have lift-out sections which effectively join two areas together meaning that larger groups of cats can be accommodated if they have come from the same home.

Wadars Chair of Trustees, Christie McMahon, said; “We are absolutely delighted to have opened our new cattery and having the High Sheriff to do the honours for us was the icing on the cake. Rehoming animals from our own site has been a dream for a number of years, and to be able to open the cattery as part of our 50th birthday celebrations is just fantastic.”

Christie continued; “The next step for us is to build a large aviary in which to house seabirds until they can be released, and we plan to have this in place around June time before we are inundated with gull chicks. Future development plans include building kennels, a centre reception, an education room, and an animal assessment room, as well as developing a larger wildlife area. Sadly, we don’t currently have the funds to carry out that additional development yet but hope that local people will get behind us and help to raise the money that’s needed.”

Other guests at the official opening included representatives from Battersea Dogs & Cats Home, which has awarded a grant to Wadars to help pay for some of the equipment within the new cattery. Margaret Hulme, Grants Manager at Battersea added; “We hope that this grant will help make a real difference to the lives of cats and dogs in the community. Battersea helps more than 7,000 dogs and cats each year, at our three centres in London, Berkshire and Kent and beyond. We want to support rescues and shelters in the UK, not only by awarding funding, but also by sharing the experiences and knowledge we have gained as an animal welfare charity that has been rescuing and rehoming animals for 158 years.”