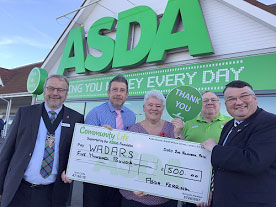 Wadars animal rescue would like to say a big thank you to customers of ASDA’s Ferring supermarket after coming out on top of the store’s Green Token Scheme.
Customers are given tokens at the till that they can put in a box of their choice at the front of the store, and Wadars was one of three charities that customers could choose from between June and August. The animal charity received hundreds more tokens than the second placed organisation.
Wadars Operations Manager, Tracy Cadman said; “We are delighted to receive £500 from ASDA as a result of their token scheme, and of course extremely grateful to local people for voting us the winners. We don’t receive any government funding and rely heavily on the support of the public, and this money will help us to feed and looked after the animals in our care.”
Anyone interested in adopting an animal from Wadars or supporting the charity should call them on 01903 247111. 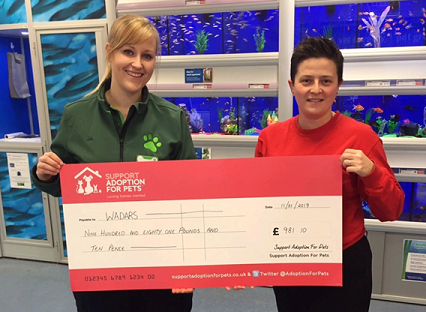 A big thank you to the staff and customers at Pets at Home Worthing who raised over £981 for Wadars through their Santa Paws campaign during December.

Wadars rely heavily on the support of locally based businesses to raise funds which enable us to continue to run our vital services.

We have some weekend collections at the Pets at Home Worthing store during December 2017, so if you can spare a couple of hours to help with the collections then we would love to hear from you. You can either calls us on 01903 247111 or email fundraising@wadars.co.uk 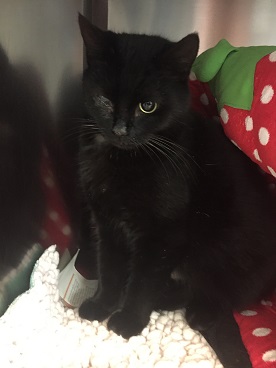 We are appealing for donations to help cover the cost of an emergency operation to remove the badly injured eye of a stray female cat.

The heavily pregnant cat – nicknamed Bluebell by staff at Grove Lodge vets – was picked up by Wadars on Wednesday (8th February) following a call from a member of the public, and had been living rough under a camper van in Goring for about a year.

The cost of the treatment that Bluebell has had so far and the operation to remove the eye will cost the charity between £450 and £550. On veterinary advice the operation is being carried out today (9th February) in advance of Bluebell giving birth, which she is likely to do in the next week.

Wadars Operations Manager, Tracy Cadman said; “Bluebell is a friendly little girl so must have been owned at some point. She is likely to have been in quite some pain and discomfort with that eye. It appeared to be an old injury that hasn’t been treated, and obviously we have given the vet the ok to go ahead with the operation and we will pay for it, but being a small charity it is a lot of money for us to pay out.”

Tracy continued; “The same cat apparently had a litter last year but only one kitten survived. That ‘kitten’ is now feral and we have put a trap out to catch it so that it can be given a health check, neutered, and then rehomed on a local farm where it will be fed daily, but also given its freedom again.”

Anyone wishing to make a donation to help with Bluebell’s operation and on-going costs should either click on the Make a Donation page of this website, or send a cheque made payable to ‘WADARS’, to Wadars, Hangleton Lane, Ferring, BN12 6PP.